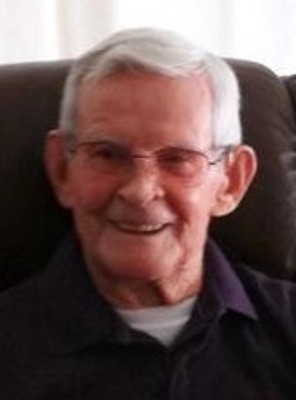 Wilbur “Webb” G. Isner, 96, of Fremont, OH passed away on Sunday, August 23, 2015 at Elmwood Nursing Home in Green Springs, OH. He was born on September 24, 1918 in Akron, OH, the son of Emit Jefferson and Hanna B. (Smith) Isner. Webb attended Akron University where he received a Degree from the Business College.
Webb married Pauline V. Busche on November 28, 1942 in Akron and she preceded him in death on December 17, 2001. He worked as a General Foreman at Ford Motor Company from 1958 until he retired in 1981. Webb was a member of Hayes Memorial United Methodist Church and a member of the Fremont Elks and Moose. He was a social member of the VFW and American Legion. He enjoyed golf, dancing, singing and spending time with his family.
Webb is survived by his daughters, Linda (Fred) Speece of Minnetonka, MN and Becky Jean Isner of Fremont, OH; grandchildren, Darren (Tiernan) Speece, Eric (Glenda) Speece, Todd (Legare) Speece; great grandchildren, Teo, Mara, Porter, Alexander, Otelia and Tomas.
He was preceded in death by his parents; wife, Pauline V. Isner; brothers, Durward and Alvis Isner.
Webb’s family would like to thank Elmwood and Hospice for the wonderful care and compassion they gave him during his stay.
Visitation: Saturday, September 5, 2015 from 10:00 – 11:00 am at Hayes Memorial United Methodist Church, 1441 Fangboner Rd, Fremont, OH.
Service: Saturday, September 5, 2015, 11:00 am at the church with Pastor Alan Brown officiating.
Burial will be private for the family.
Memorials: Elmwood Nursing Home, 430 N. Broadway St, Green Springs, OH 44836; Hospice of ProMedica Memorial Hospital, 430 S. Main St, Clyde, OH 43410; Sandusky County Board of DD c/o Clyde Life Enrichment Program, 1001 Castalia St, Fremont, OH 43420 or Donor’s Choice
Online Condolences may be expressed to the family at www.whhfh.com

Offer Condolences for the family of Wilbur “Webb” G. Isner