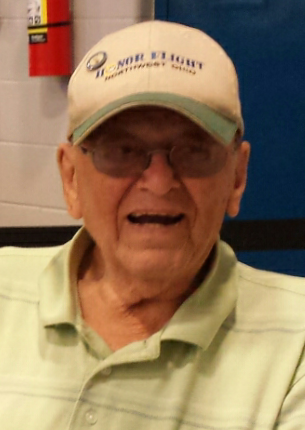 Walter “Junior” L. Feasel, 90, of Fremont, OH passed away on Tuesday, August 18, 2015 at home surrounded by his loving family. He was born to Anna (Ranker) Feasel who passed away during childbirth on March 11, 1925 in Tiffin, OH. He was lovingly raised by his grandparents, Japhet and Vesta Feasel along with his nine uncles and two aunts.

Walter served in the U.S. Army from September 11, 1943 to April 28, 1945. He was wounded in France on July 24, 1944 and was awarded the Purple Heart. He also received the ETO Ribbon and one Bronze Star; Combat Infantryman’s Badge, Good Conduct Medal and WWII Victory Medal.

Walter married Helen C. Filliater on May 12, 1945 at St. Wendelin Catholic Church in Fostoria, OH. They were together for sixty-four years until she preceded him in death on April 15, 2009.

Walter worked as a Shipping and Inventory Clerk at Whirpool Corporation in Clyde and after thirty-eight years, retired in 1988. He was a Founding Member of Sacred Heart Catholic Church. He was also a member of the Bradner American Legion, the Fremont VFW and Moose Club. Walter enjoyed fishing, putting together antique models, playing pool, antique cars and roller skating in his younger years. He was an inspiration to many over the years because of his determination. Walter felt honored to go to Washington D.C. on the Honor Flight.

He was preceded in death by his parents; wife, Helen C. Feasel; grandson, Michael Feasel.

Mass of Christian Burial: Saturday, August 22, 2015, 1:30 pm at Sacred Heart Catholic Church with one hour of visitation at church prior to the service, 550 Smith Rd, Fremont, OH. Fr. John Blaser will officiate.

Offer Condolences for the family of Walter L. Feasel