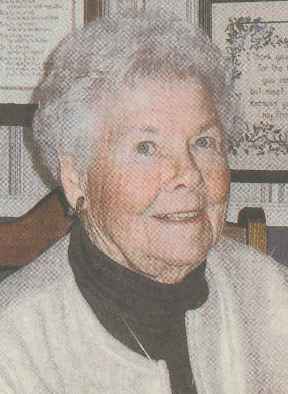 Shirley Mattson, 88, of Fremont died at home on October 1, 2015. She was born February 2, 1927 to George and Esther (Hill) Murray in Iron River, Michigan. After graduating as salutatorian of her class in Iron River, she attended nursing school at Northwestern Memorial Hospital in Chicago and graduated as an RN. She married Frank Mattson, also of Iron River, in 1949. They had five children. In 1964 the family moved from the Upper Peninsula to Fremont and had a house built on Swiss Road. Shirley lived in that house until last year when she moved to assisted living.

Following her husband’s death in 1972, she returned to work in nursing. She was Director of Nursing at Countryside and then Head of Nursing at St. Francis Rehabilitation Hospital. She retired in 1990. In her retirement years she volunteered for Memorial Hospice, Red Cross, and the Atkinson School Reading program. She was a member of First Presbyterian Church. She used her nursing skills to help her friends and family as they coped with health and aging problems. She enjoyed playing cards, reading, and traveling with her gentleman companion of many years, Bud Burkett. They spent several weeks every summer at her cottage on Golden Lake near Iron River.

She is survived by daughters, Jane Hart (Tom) of Atlanta and their four children; Shelley Gahn (Bruce), of Cincinnati and their two children; son, Peter (Karen) of Austin, MN and their son; her daughter-in-law, Rosanne Mattson of San Francisco and her three children. She has six great grandchildren. She may have mentioned to you that all of her grandchildren have college degrees, three are doctors, and one is finishing her PhD. She liked to brag about that a little.

As she coped with the losses of friends and family and the difficulties of aging, she showed all of us how to live positively and age gracefully.

Memorial Service: Monday, October 5, 2015; 11:00 a.m. at the funeral home with an hour of visitation prior to the service. Rev. William McConnell will officiate.

Burial will take place at Oakwood Cemetery on Monday at 2:30 p.m.

She asked that in lieu of flowers, any memorials go to Hospice of ProMedica Memorial Hospital or Shriner’s Children’s Hospitals.

Offer Condolences for the family of Shirley Mattson