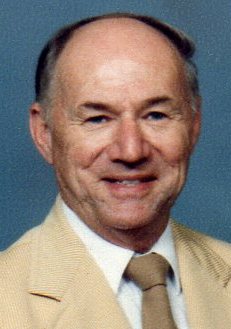 On April 6, 2017 Robert William Thomas, Jr., 92, of Fremont, OH walked up the stairs of Heaven into the arms of his high school sweetheart Margaret, his wife of sixty-six years who preceded him in death. Also, waiting for him were his parents, Marie and Robert Senior.

Robert was born on August 5, 1924 in Augusta Georgia where his father was playing semi-professional baseball. He moved to Fremont soon thereafter and lived there the rest of his life. He graduated from Fremont Ross High School in 1942 where he was a member of two State Championship swim teams.

Robert entered the U.S. Navy in March 1943. He attended Navy Radio School in Oxford, OH for six months. In November, he boarded the USS Card, CVE Number 11. He served for nineteen months on the Card in WWII in the North Atlantic. The Card was the first CVE to get the Presidential Unit Citation in WWII for anti-submarine work as part of a hunter-killer group. He received two Bronze Stars for his participation in the European African Middle Eastern Campaign. He also received the American Area Campaign Ribbon and WWII Victory Medal. After the war, he was employed at the U.S. Post Office, working there for thirty-eight years until his retirement in 1984.

Robert was the Scout Master of Scout Troop 334 and served as a Little League and Pony League coach for fourteen years, winning a City Championship in each league. An avid train collector, he was a member of the Train Collector’s Association. He and his wife attended St. Mark Lutheran Church. They delivered mobile meals for Memorial Hospital for twelve years.

Service: Monday, April 10, 2017, 10:30 am at St. Mark Lutheran Church, 902 East State St, Fremont, with one hour of visitation at the church prior to the service. Pastor Scott Mauch will officiate.

Memorials can be made to St. Mark Lutheran Church or Hospice of ProMedica Memorial Hospital.

Offer Condolences for the family of Robert William Thomas, Jr.