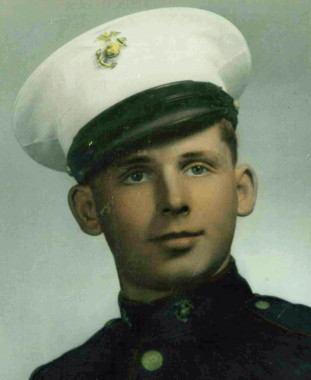 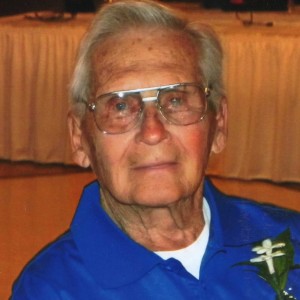 Robert L. Wonderly, 91, of Helena, OH passed away on February 9, 2016 at his home surrounded by his family. He was born on December 6, 1924 in Riley Township, OH to William and Lorena (Auxter) Wonderly.

Bob served in the U.S. Marine Corps during WWII from 1943 to 1946. He was part of the 5th Division that participated in the assault and capture of Imo Jima and also the Occupation of Japan. He married Jean Baker on June 25, 1949 at St. Mary Catholic Church in Millersville and she survives.
Bob was a carpenter for Mosser Construction and a construction superintendent for Focht Brothers in Tiffin, OH and Alvada Construction until he retired. He was a member of St. Mary Catholic Church, Millersville, Gibsonburg American Legion and Fremont Moose. He enjoyed building, farming, gardening, hunting and cutting wood. He was the guy to always turn to because he could fix anything.
Bob is survived by his wife of sixty-six years, Jean Wonderly, Helena; children, Terri (Ted) Parks, Troy, MI, Steve (Nancy) Wonderly, Findlay, Joe (Nancy) Wonderly, Maumee, Jeff Wonderly, Republic, Mike Wonderly and Matt (Linda) Wonderly both of Helena; siblings, Elaine “Sis” Ruggiero, Fremont and Pat Wonderly, Oak Harbor; grandchildren, Katie Ward, Abby and Betsy Wonderly; great grandchildren, Dominic, Braeden, Malani and Evyn.
He was preceded in death by his parents and his siblings, Donald Wonderly and JoAnn Hofelich.
Memorial Mass of Christian Burial will be held on Saturday, February 13, 2016; 11:00 a.m. at St. Mary Catholic Church, 865 OH State Route 635, Helena, OH 43435 with one hour of visitation prior to the service at the church. Father Chris Bazar will officiate.
Burial: St. Mary Cemetery, Millersville with military honors provided by the American Legion.
Memorials: Heartland Hospice, 907 W. State St., Fremont, OH 43420 or Donor’s Choice
The family would like to thank all of the nurses and staff at Heartland Hospice for their compassion.

Offer Condolences for the family of Robert L. Wonderly