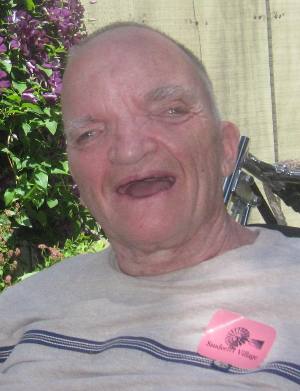 Robert (Bob) Harold Haggerty, 70, passed away peacefully on December 4, 2015 at Elmwood Nursing Home in Green Springs. He was born on January 29, 1945 in Fremont, Ohio, the only son of Harold (Sox) and Eileen Haggerty. Due to an unfortunate incident at birth, Bob was confined to a wheelchair and had limited movement and speech, yet he conveyed his thoughts in a way others could understand.
He lived at his home until 1999 at which time he moved to Elmwood Assisted Living and eventually to Elmwood Nursing Home. Bob was baptized on February 24, 2002 at Green Springs United Methodist Church by Reverend James Scott and held a strong faith in God. He worked at Sandco Industries in Fremont for many years.

Bob was quite the character and a very special person. He loved to joke and laugh and had the cutest smile. He teased everyone he could and kept the staff at Elmwood on their toes. He could be grumpy and stubborn at times, but in general he was pure, happy and humorous. He smiled often, laughed heartily, joked, teased, complained, and observed life with an intelligent mind.
He loved birds, lighthouses, and flowers. When he lived at his parents’ home he enjoyed watering and tending to his flowers, being outside (often sitting by the road waving to friends passing by), feeding corn to the birds, fishing, reading the newspaper, listening to music, and running over his mother’s toes with his wheelchair. At Elmwood he kept hermit crabs in his room and birdfeeders outside his window. He enjoyed flirting with pretty girls and blowing kisses to them.

Bob was loved by all and touched many lives. He was a joy to be around and had many friends who adored him. He was an inspiration and overall good guy. He will be missed by his family and friends, including his Elmwood family.

He is preceded in death by his father, mother, and sister, Bea Powers.

Guests attending the funeral are invited to join the family for a potluck dinner. Details will be given after the service.

Memorials may be made to Sandco Industries, The Food Pantry, or the donor’s choice.

Offer Condolences for the family of Robert H. Haggerty