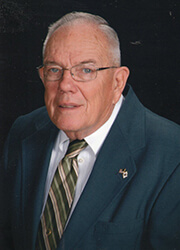 Dick married Clara Omlor Chalet on May 26, 1989 at Sacred Heart Catholic Church and she survives. He was a tool and die maker at Union Carbide/Eveready Battery for 34 years until he retired in 1997.

Dick was a member of St. Ann Catholic Church, American Legion and a life member of the V.F.W. Post 2947. He enjoyed boating, fishing and working in his repair shop. Dick loved to spend time in Michigan and the North East United States. He also loved spending time with his family.

He was preceded in death by his parents and step-granddaughter, Emily Mitten.

In lieu of flowers memorials can be made to St. Jude’s Children’s Hospital, Make-A-Wish or Hospice of ProMedica Memorial Hospital

Offer Condolences for the family of Richard “Dick” E. Hampshire