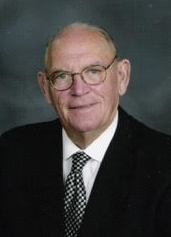 Richard “Dick” Alvin Bradfield, 89, of Fremont, OH passed away on Tuesday, March 7, 2017 at ProMedica Ebeid Hospice Residence in Sylvania, OH. He was born on October 17, 1927 in Cincinnati, OH, the son of Shirley Frances and Nelva (Van Horn) Bradfield. He was a graduate of Withrow High School and attended the University of Cincinnati.

Dick married Margaret Rita Brockcamp on September 13, 1947 in Cincinnati and she preceded him in death on March 28, 1987. He was a Machinist and Shop Foreman at Glasstech, Inc. in Perrysburg, retiring in 1989 after many years of service. He had previously worked for Cincinnati Milling Machine, Planet Products, Borg Warner and Kelsey Hayes. Dick was a member of Sacred Heart Catholic Church and enjoyed spending time with his family, golfing, bowling, dancing and traveling. He was an Eagle Scout and a Scout Master in Cincinnati and at Sacred Heart Church.

Offer Condolences for the family of Richard “Dick” Alvin Bradfield