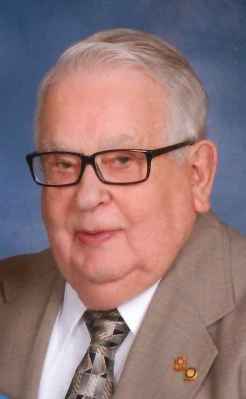 Owen “Russ” McCormack, 92, of Fremont, OH passed away peacefully surrounded by his family on Saturday, November 26, 2016 at Bethesda Care Center in Fremont. He was born on August 27, 1924 in Owosso, MI, the son of Owen R. and Pearl L. (Losey) McCormack.

Russ served in the U.S. Navy during WWII in the South Pacific from August of 1943 to October 1945. He served aboard the USS Grant and was wounded in action during the battle of Leyte Gulf in the Philippines. He married Patty L. Wolf on August 22, 1947 in Fremont and she survives.

Russ “Mack” was a Fireman with the Fremont Fire Department for thirty-one years and retired on April 20, 1984. He was a member of Hayes Memorial United Methodist Church, the Fremont VFW, American Legion and the Disabled American Veterans. He enjoyed spending time with his grandchildren and attending with their sporting events. He was an avid Fremont Little Giant fan along with Michigan Wolverines, Detroit Lions and Detroit Tigers. Russ spent a lot of time at his second home, Swint Reineck Hardware.

He was preceded in death by his parents; brother, William M. Titsworth and sister, Gerry F. Dagnall.

The family would like to give a special thank you to Shelly, Brenda and Nicole with Hospice of ProMedica Hospital, and the rest of the staff, Dr. Dennis Furlong and his staff and the Sandusky County EMS.

Burial: Four Mile House Cemetery with Military Honors provided by the VFW and the American Legion.

Offer Condolences for the family of Owen “Russ” McCormack