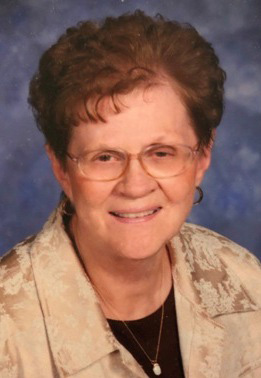 Maxine Marie Rutherford, 85, of Green Springs, OH passed away on Thursday, December 5, 2019 at Elmwood Assisted Living of Fremont. She was born September 10, 1934 in Fremont, the daughter of Roy and Esther (Seward) Grundy. She was a 1952 graduate of Fremont Ross High School.

Maxine married Bud Rutherford on June 11, 1954 at St. Mark Lutheran Church in Fremont.
She worked at Colemans in Fremont during her high school years. Maxine met her future husband while working there. He would stop there after playing baseball games. They started dating when she was a senior in high school. After graduation she worked at the National Bank in Fremont until their daughter was born. After their children started school she worked as an aide at the Green Springs School. She then worked at Clyde High School as a secretary for twenty-five years and retired in 1998.

Maxine and Bud vacationed at Lakeside for many years. After they both retired they always purchased season passes; they would go there more than forty times during the summer and always ate their meals at the Abigail Tea Room. Maxine was a member of the Green Springs United Methodist Church.

She was preceded in death by her parents and sister, Janet (Bob) Smith.

The family would like to thank the staff at Elmwood Assisted Living in Fremont for the excellent care they gave to Maxine during her stay at their facility.

Memorials can be made to the Bud and Maxine Rutherford Scholarship for Clyde High School, care of Board of Education Office, 106 South Main St, Clyde, OH 43410

Offer Condolences for the family of Maxine Marie Rutherford