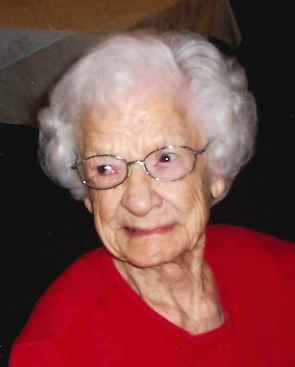 Mable had been a resident at Valley View Healthcare Center for six years. She was born June 5, 1910 to Bessie (Deitrich) and Harvey Leggett in Bowling Green, OH. Mable and George Woodruff were married in September, 1926. Two children were born to them, Leo and Jean. George passed in 1949. Fifteen years later Mable and Emil Fronek were married at the Calvary Assembly of God church in Fremont. Emil passed in 1972.

Mable attended this church and taught Sunday school class for many years. She was a regular visitor at the Sandusky County Home and held a Sunday service there once a month. In 1950 she went to work at the Herbrand Company and after nine years there she went to work at Yerges Manufacturing Company.

Mable was the eldest of seven children and helped raise her siblings. Two of her favorite hobbies were working in her flower garden and raising canaries. She enjoyed sewing. Mable was the family barber and also cut hair for the neighborhood boys.

The highlight of her life was her grandchildren, Jim, Barbara, Ben, Donnie and Mark. She spent much time with them, took them swimming, took them on picnics and told them many stories of her child. She was a wonderful cook and a great housekeeper.

In the late forties she took care of several welfare children. Mable was in her eighties when she painted her house and at ninety she could still mow her lawn. She was a remarkable person to all who knew her. We will cherish precious memories of her always. What an inspiration and role model she was.

Services and Burial at Oakwood Cemetery are Private.

Offer Condolences for the family of Mable Marie Fronek