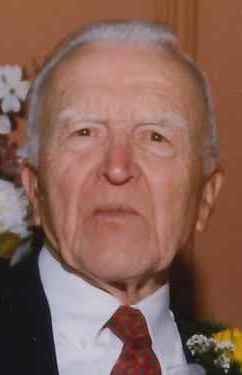 He was born at home on February 26, 1919, the fourth child of Ervin Arienous and Cora Maria (Lederman) Abbott of the Gibsonburg Area. His father died in 1949 and mother in 2000. Siblings; Oral, Oleta (Nitsche), Dale, Russell, Lloyd and RJ have all preceded in death.

He graduated from Gibsonburg High School in 1937. Along with farm work his working career began as a milk-hand at the George Miller Farm west of Helena. He later moved to Fremont as a milk-route deliveryman and in-plant operations for the Havenshire Dairy.

In August 1942, he (Ike) and brother Russell (Mike) joined the Coast Guard under the Buddy Plan. After recruit training with seven other Fremont area men, in Buffalo, N.Y. they were transferred to Motor Machinists Mate School at Gotron, Connecticut. Upon graduation and promotion to Second Class Petty Officer they reported to Light House / CG Station Duty in Michigan’s UP. In 1943 they were split up after the five Sullivan Brothers were lost in action on the cruiser USS Juneau at the Battle of Guadalcanal. Russell went to a CG Frigate off the East Coast for iceberg and U-Boat chasing duty. Roy was sent to the Pacific on board the “W.J. Conner”, a converted lake freighter to repair ship. He served in the steam propulsion/black gang throughout the South Pacific and with the Occupational Forces of Japan.

Three other Abbott brothers also served in WWII; Oral was a US navy Seabee in Hawaii, Dale was in the Naval Armed Guard protecting merchant shipping thru-out all theaters of the world conflict. Lloyd was drafted into the USMC and went ashore with the Fourth Div., 24th Marines at Iwo Jima. All five Abbott brothers returned safely home to the Jackson Township family farm at the end of the war.

Leroy returned to work at Havenshire Dairy moving into plant production supervisor. He was instrumental in the production of cottage cheese, vitamin D milk and other dairy products some of which took first prize at the Ohio State Fair for six consecutive years.

In 1955 he married Helen (Miller) Turley and settled in the Fremont area. They were longtime members of the First Presbyterian Church where he served on session for several terms. In 1964, Mr. Abbott began a 20-year career with the Sandusky Ford Motor Co. as a Quality Control Inspector after Havenshire Dairy closed. He retired from Ford in 1984 to spend 26 winters working as a mechanic for Aircraft Engineering Inc. of Winter Haven, Florida, owned by his youngest step-son.
Living north all year in their Fremont home since 2010, he dressed every day in his aircraft uniform and greatly missed the Florida sunshine and comradery of Bartow Airfield.

He loved automobiles, gardening and tinkering in his home shop. His nephews called him “DOC” as he could fix anything. In his day, he would have been considered a Master Mechanic.

A Service will follow the visitation at 11:30 am at the funeral home with Pastor Gary Click officiating.

Burial will take place at Oakwood Cemetery at a later date.

Offer Condolences for the family of Leroy W. Abbott