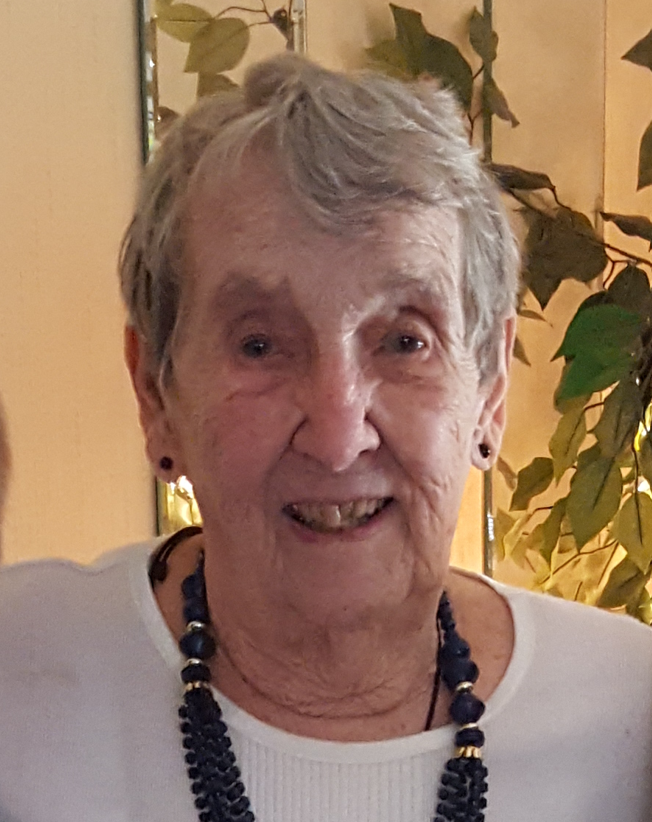 Jeanne was born March 25, 1922 in Fremont, Ohio to parents Lillian E. Kroetz and Irvin E. Mittan.  She had four siblings; Betty Pfaff, Karen Crispen, and Irvin (Butch) Mittan, who predeceased her, and Joanne Slaymaker of Fremont, who survives.

Jeanne was a hard worker, starting out as a waitress at Freeh’s Restaurant in Fremont in the 1940s.  She met her future husband Paul on July 5, 1938 at a local roller-skating rink.  As she was still a teenager, they dated until she graduated from Fremont Ross High in 1940 and were married September 25, 1941.

Life for many young couples of the time period was defined by the events of World War II. Their daughter Paula (born August 26, 1942) was only four months old when Paul left for active duty in the Philippines in January 1943. Jeanne and Paul were unable to see or speak to each other for three long years, communicating only through V-Mail, letters that were sent back and forth to troops stationed overseas. During this time, Jeanne worked at the Union Carbide plant in Fremont. Paul returned in January of 1946, and their second daughter, Bethann, was born March 4, 1948.

An early “Working Mom”, Jeanne worked in the advertising department of the Fremont News-Messenger and was also Deputy Clerk of Courts at the Sandusky County Courthouse in the 1970s. She was a partner with her husband in his business Paul E. Goodman Home Builder, doing accounting and payroll for the busy construction company.

When she wasn’t working, she and Paul spent much of the 1970s travelling.  He used to ask her, “What do you want for your birthday/anniversary?” and trips all over the world followed, including all 50 states, much of Europe, South America, Australia, North Africa, many Island Nations, and several parts of Asia.

A special memory was a 1971 trip to the Philippines and New Guinea, where Paul had served with the 1881st Aviation Engineers during World War II. They were invited to the dedication of the MacArthur monument in Leyte, and during this visit, they had the pleasure of being the honored guests of Ferdinand Marcos at the palace.

Jeanne was a member of St. John’s Lutheran Church in Fremont, and an Associate Member of Redeemer Lutheran of Sun City Center.  She is also a former member of Fremont Federation of Women and the Legal Secretary Association.

Her passions throughout the years included golf, tennis, travel, doll collecting, bargains (thrift stores were a favorite), dancing, and the occasional well-timed vodka martini. She loved the unusually fragrant and beautiful Lavender Rose bush her sweetheart Paul planted for her.

Her grandchildren and great-grandchildren adored her, and she was thrilled to be able to spend time with them on Disney World trips, playing UNO, and doing puzzles together.

Jeanne spent her last days in the loving arms of her family who will be eternally grateful for the compassionate and heartfelt care she received from Dr. John Fox and his staff, the Lavender Team at Empath Hospice, and her loving caregivers at Here For You Home Health Services. The family also thanks the extended staff at Elmcroft Senior Living of Largo for their continued vigilance and dedication to Jeanne and all the residents they look after.

Jeanne requested that the following be included in her obituary. She thought it said perfectly what she wanted her loved ones to know:

When she was leaving, someone whispered, “There she goes…..”

And then they all heard happy voices saying, “Here she comes!!!”

Her message to all is to make each day count, make the world a better place, love each other, and never miss an opportunity to make a new friend.

In lieu of flowers, family requests that donations be made in the memory of Jeanne M. Goodman to Shriners Hospital for Crippled Children, 12502 USF Pine Drive, Tampa, FL 33612.

Offer Condolences for the family of Jeanne Mittan Goodman