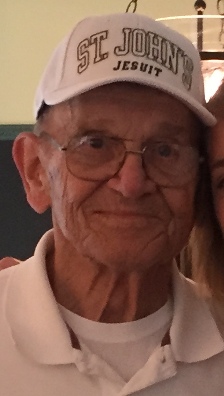 James J. Kritzell, 87, of Fremont, OH passed away peacefully at his home on Tuesday, August 30, 2016. He was born September 4, 1928 in Fremont to Charles and Sibylla (Heck) Kritzell. He was a 1946 graduate of St. Joseph Catholic High School.

Jim served stateside in the U.S. Army during the Korean War. He married Catherine Klisz on May 5, 1956 at St. Casimir Catholic Church and she survives.

Jim was employed at Whirlpool for twenty-eight years, retiring as a supervisor in 1988. He was a lifelong member of St. Casimir Church where he served on many committees. Jim was a member of Sacred Heart Catholic Church. He was an avid golfer and played on two senior leagues through last year. Jim was a cross word puzzle extraordinaire and enjoyed woodworking and working with his hands. Jim saw the best in everyone and to him everyone was a friend. He was always willing to help anyone in need.

The joy of his life was his family, especially his grandchildren. He was dearly loved and will be greatly missed.

He was preceded in death by his parents; brothers, Irvin “Bud” and Donald Kritzell and sister, Doris Anne Johnson.

Memorials can be made to the family

Offer Condolences for the family of James J. Kritzell