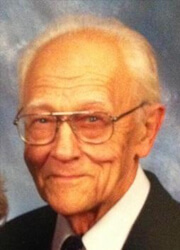 James B. Lees, Jr., 98, of Fremont, OH passed away peacefully on Sunday, May 31, 2015 at Elmwood Assisted Living in Fremont. He was the son of James B. and Carrie Lees, and grew up in Allentown, PA.

Jim received a Certificate as an Aircraft Mechanic in Long Island, NY and later served at Spartan Aviation in Tulsa, and then in the U.S. Army Air Corps as a flight officer during World War II.

Jim married the love of his life, Alice, in Tulsa, OK in 1945. He worked for 33 years as an Aircraft Mechanic on the line at American Airlines until his retirement. He was also a pilot and member of the Experimental Aircraft Association. Jim was a member of St. John’s Lutheran Church in Fremont and the First Lutheran Church in Tulsa, OK. He and his wife were active and beloved residents at Inverness Village retirement community in Tulsa for several years.

Jim enjoyed everything related to airplanes, along with camping, dancing, tennis, jigsaw and crossword puzzles, exercising, family and church activities, and photography. He and Alice also traveled extensively throughout the U.S. and in many countries around the world. Jim could repair just about anything, and loved to help people. He also had a consistent thirst for knowledge and continued to learn and try new things throughout his life. He was particularly known for his strong work ethic, meticulous craftsmanship, generous spirit, steadfast devotion, delightful smile and sense of humor.

Offer Condolences for the family of James B. Lees, Jr.