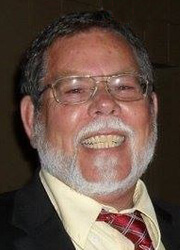 He was preceded in death by his father, Clarence Wammes, Jr. and baby sister, Martha Wammes.

Jim was employed by Port Clinton Lumber Company for over 15 years. He then worked at Ohio Department of Transportation, District 2 at the Fremont location, in road maintenance and Account Clerk retiring after 23 years on December 31, 2014.

In his early life, Jim enjoyed hunting, skiing, and boating. Later he enjoyed fishing, traveling, landscaping, barbequing (especially barrel chicken) and building his train sets. He coached youth football for many years at St. Joseph School and enjoyed attending his son’s baseball games. He was very active with his daughters’ activities, building sets for the SJCC drama productions. He was a member of St. Joseph Catholic Church, SJCC Booster Club, Bingo worker in the 80’s, past member of the Republican Century Club and K of C Club. Jim was known for telling a great story and his keen sense of humor. He loved to spend time with his family, friends and especially his grandchildren.

Mass of Christian Burial: Tuesday, May 26, 2015; 11:00 a.m. at St. Joseph Catholic Church, 702 Croghan St., Fremont, OH. There will be an hour of visitation at the church prior to the service. Fr. Michael Zacharias and Fr. James Halleron will concelebrate.

Offer Condolences for the family of James A. Wammes