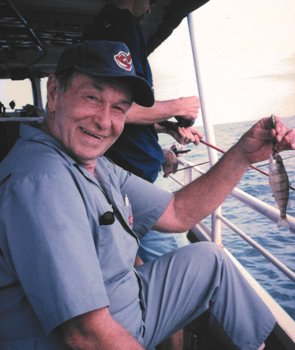 Harold E. Dittemore, M.D., 90, of Fremont, OH passed away on July, 4, 2018 at his home surrounded by his loving family. He was born on July 5, 1927 in Severance, Kansas to Myrtle Susan Mink Dittemore and Harold Adam Dittemore. His father died in an auto accident when he was six weeks old. When he was two, his mother married William Isaac Moorhead, who helped raise him to adulthood. He was raised on a dairy farm in Highland, Kansas.

Harold attended Highland Public Schools & Highland College during high school. Immediately after high school graduation, in order to serve his country in World War II, he enlisted in the U.S. Marine Corps serving until the war’s conclusion. Upon honorable discharge in 1946, he went on to receive a BA from the University of Kansas, Lawrence, and then a Doctor of Medicine from the University of Kansas College of Medicine in Kansas City, Kansas, in 1953. His internship was served at St. Mary’s Hospital in Kansas City, Missouri. He was a family practitioner and also worked in Emergency Medicine in Kansas and various locations across the southwestern United States. After 42 years of practice he retired in 1995. Harold married Faye (Abbott) Alexander on September 23, 1995 at Grace Lutheran Church and she survives.

Harold enjoyed the practice of medicine and in getting to know his patients. He also loved to fish, especially fly fish, canoe, and hike. He was an accomplished painter and especially enjoyed water color painting. When he retired, he traded in his stethoscope for a spatula and was an avid cook and baker. He loved to try new recipes and was known by many for his wonderful cookies, pies, soups, and yeast breads. He gladly shared his recipes with others. He was a member of the First Presbyterian Church and the University of Kansas Alumni Association.

Visitation will take place on Saturday, July 14, 2018 from 9 to 11 a.m. with a celebration of life ceremony to follow at Wonderly Horvath Hanes Funeral Home and Crematory, 425 E State St., Fremont, OH. A funeral luncheon will follow at the First Presbyterian Church, 120 S Park Ave, Fremont, OH.

In lieu of flowers, donations may be made to Promedica Memorial Hospice, The Liberty Center of Sandusky County (homeless shelter), or the Parkinson Foundation.

Offer Condolences for the family of Harold E. Dittemore, M.D.