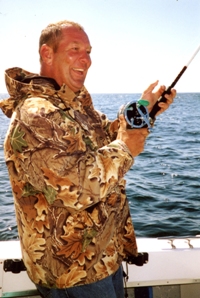 Grover Michael Dowell, 66, of Fremont, OH passed away Thursday, September 14, 2017. Although a less than average life span, Grover did not live an average life. He wanted it known that he died as a result of being stubborn, living life on his own terms and raising hell for more than six decades. He enjoyed hunting, fishing, riding his Harley, guns, cooking and socializing with his friends in the barn until the day he died.

He was born on July 17, 1951 in Westville, OK, the son of Chester Leroy and Margaret Mary (Vranish) Dowell. He was in the first class to attend Vanguard Vocational school and graduated from Fremont Ross High School in 1969. Upon graduation, he enlisted in the U.S. Marine Corps. to honor his Father’s service. Grover served during the Vietnam War from August 19, 1969 to August 18, 1972 and was awarded the National Defense Service Medal; Vietnam Service Medal; Vietnam Campaign Medal; Good Conduct Medal and Marksman Riffle Badge.

Upon his honorable discharge from the Marine Corps, Grover attended Bowling Green State University where he earned his Bachelor’s Degree in education. He began his teaching career at Genoa High School and retired from Vanguard Vocational School in 2005. He served as a football and wrestling coach at Genoa and a wrestling coach at Fremont Ross High School. His 30+ years as a teacher and coach afforded 100’s of young men and women and their parent’s exposure to Grover’s unique personality.

He was preceded in death by his parents and brother, Leslie Dowell.

In lieu of flowers, donations can be made to the VFW Post #2947 in his name. A fund has been established to support young wrestlers who cannot afford to pay to play.

Offer Condolences for the family of Grover M. Dowell