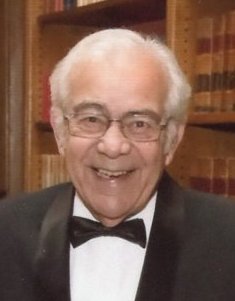 Surrounded by his family in his home, Glenn Haydn Rees 81, passed away on November 4, 2018 due to a brain tumor. He was born in Pittsburgh, PA, graduated from Clearfield High School and married the love of his life, Mona Davis in 1953 in Clearfield, PA. She preceded him in death in 2014. Glenn was the proud father of seven daughters, five of whom were born by the time he graduated from Penn State University with a degree in ceramic engineering. He had a career that spanned from a research engineer to managing director of Brush Wellman, Singapore.
Glenn loved old and new experiences and relished in sharing them with his wife, children, grandchildren, parents, and friends: from hot air ballooning in Maine, riding a donkey into the Grand Canyon, walking the Great Wall of China, jet skiing in the South China Sea, spending time at Twin Oaks Camp, snorkeling the Great Barrier Reef, and hundreds more. He visited all fifty states, all seven continents, and fifty-three countries.
After retiring, Glenn and Mona were content to settle into the Fremont home he designed, sharing it with his daughter Kathy and great granddaughter Julia. Sitting on the back porch watching his grandchildren and great grandchildren play and grow gave him immense joy. He loved animals and his home always included a few pets: currently Jethro, Maggie, and Charlie.
Glenn was a board member of the Terra Community College Lifetime Learning Center and was a perpetual student at the center. He spent eight years as a CASA volunteer and received the Sandusky County Bar Association Liberty Bell Award in 2012. He was an active member of Kiwanis and a Big Brother to several area children.
His invaluable advice and contributions to his family, friends, and community will be missed. The lessons of life he shared with his family have become a part of them and they will impart these to the generations to follow. This is what Glenn strived for and he was happy to know what an influence his life experiences had within his family.
He is survived by his daughters Pamala Rees, Linda Wingate, Kathy Davis, Sandy Edwards (Chuck), Tawni Schwochow (Loren), and Laura Manahan (Scott). He was preceded in death by his wife Mona, daughter Tracey Rees Lawson, grandson Ryan Wingate, his parents Haydn and Betty Rees, mother and father in law, Audrey and Rex Davis and brother in law Larry Davis. He will be greatly missed by nineteen grandchildren, twenty-seven great grandchildren, a niece and two nephews.
His core beliefs were simple: “If I am in a position to cause you happiness or sadness, I have an obligation to try to provide happiness. I believe in treating others as I would like to be treated. This includes honesty and truthfulness as well as not stealing. Decisions should be made because they make sense here on earth, not because what may or may not occur in an afterlife.”
A Celebration of Life for family and friends will be held on November 17, 2018 at the Fremont Elks Lodge, 436 Croghan Street, Fremont, OH 43420 from 1:00 to 4:00 pm. In lieu of flowers, donations may be made to your local humane society, Kiwanis Club of Fremont, Ashland University Softball Association, 402 College Avenue, Ashland, OH 44805, or the charity of your choice.

Offer Condolences for the family of Glenn Haydn Rees