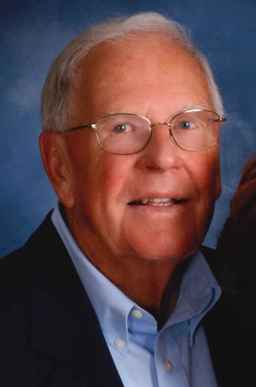 Fred served in the US Army during the Korean Conflict from 1951 to 1954 and was awarded the Korean Service Ribbon with 3 Bronze Campaign Stars, the United Nations Service Medal, the National Defense Service Medal and the Merit Unit Citation.

Fred married Valerie Abbott on April 6, 1955 at St. Andrews United Methodist Church in Findlay, OH by Rev. Donald Cryer. He worked in the banking industry for many years. He was the president of Tri-County National Bank starting in 1980. They then merged with Society Bank of Northwest Ohio were he became the Chairman of the Board and Chief Operating Executive, a position he held for many years. Society Bank then merged with Key Bank which is where he retired from in 1994.

Fred attended Hayes Memorial United Methodist Church where he served on the Finance Council. He was a member of St. Andrews United Methodist Church in Findlay. He was also a member of the Fremont Outing Club, and the Fremont Country Club where he enjoyed golfing and was a volunteer for the First Tee Program. He was also a member of the American Legion in Fremont. He enjoyed spending the winters in Fort Meyers Beach, FL with his wife for many years. Fred mostly loved to spend time with his children and grandchildren and attended many of the activities.

He is preceded in death by his parents and grandson, Brian Roynon.

Offer Condolences for the family of Fred J. Roynon, Jr.