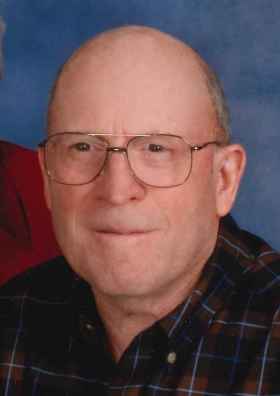 Gene married Coletta Steinbauer on January 22, 1955 at St. Mary Catholic Church in Clyde, OH and she survives. He worked as a Millwright at Whirlpool for 42 years until he retired in 1995.

Gene was a charter member of Sacred Heart Catholic Church where he was an usher and set up each year at the parish festival. He had a great love of ice skating and played hockey on his ice rink built and maintained in the side yard for his children during the winters. Skates and hot chocolate were provided for all who came.

He was an avid bicyclist still riding the trail with his pals this fall. He was known far and wide for his ability to diagnose and fix mechanical issues for family and friends. He and Coletta lived and raised their children in a house that he built when they were first married. He enjoyed restoring and showing his father’s 1943 Ford Tractor at S.C.R.A.P. each year

Gene and Coletta traveled all over North America camping with their seven children for weeks each summer. They made it to 49 states of the union including Alaska and much of Canada and Mexico. In their later years, they wintered in Big Bend, TX and Gulf Shores, AL. Friends were made from all over.

Mass of Christian Burial: Monday, November 28, 2016; 11:30 a.m. at Sacred Heart Catholic Church, 550 Smith Rd., Fremont, OH with an hour of visitation prior to the mass at the church. Fr. Ted Miller will officiate.

Offer Condolences for the family of Eugene “Gene” R. Miller