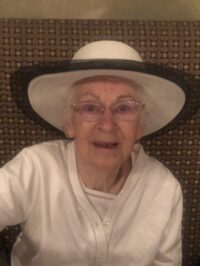 Emily F. Kiser-Wacker, 88, of Fremont, OH passed away on September 18, 2021 at her home. She was born on September 5, 1933 in Camden, AR the daughter of Marshall and Jessie (Smith) Williford.
Emily married Roy N. Wacker on June 28, 1985 in Fremont, OH and he preceded her in death on November 28, 1992. She worked at Ohio Bell for many years as an Operator, Service Observer and retired in the maintenance department in 1989.

Emily was a member of Hayes Memorial United Memorial Church. She enjoyed camping, the outdoors, bowling and riding roller coasters. She also enjoyed wintering in Florida and spending time with her family and friends. Emily enjoyed most her grandchildren.

She was preceded in death by her parents; husband, Roy Wacker; siblings, Marshall and Richard Williford and Evelyn Webel.

Visitation: Friday, September 24, 2021 from 11 am to 1 pm at Wonderly Horvath Hanes Funeral Home and Crematory, 425 E State St., Fremont, OH. A Celebration of Life Ceremony will follow at 1 pm at the funeral home.

In lieu of flowers memorials can be made to Hayes Memorial United Methodist Church or you could plant a tree in her name.

Offer Condolences for the family of Emily F. Wacker