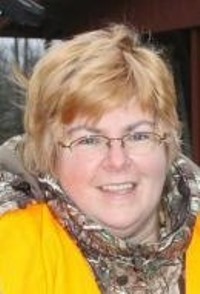 Elaine Sue Collum, 56, of Fremont, OH passed away on Sunday, December 11, 2016 at Hospice of NW Ohio in Perrysburg. She was born on September 26, 1960 in Fremont, the daughter of Ralph E. and Juanita (Linton) Billow. She was a 1978 graduate of Fremont Ross High School and attended Mt. Vernon Nazarene University.

Elaine married James H. Collum, Jr. on February 8, 1992 at the Fremont Church of the Nazarene and he survives.

Elaine currently worked at Wal-Mart for over twenty-six years. She and her husband Jim owned and operated Action Photos for thirty years doing photography and sales for numerous racers and race tracks, including Attica Raceway Park, Fremont Speedway, Findlay Millstream Speedway, Eldora Speedway and Knoxville, IA since 1989. Elaine was a member of the Fremont Church of the Nazarene and was an active Hockey Mom with the Northwest Eagles. She enjoyed hunting, reading and spending time with her family.

She was preceded in death by her father-in-law, James H. Collum, Sr.

Memorial Service: Thursday, December 15, 2016, 11:00 am at Fremont Church of the Nazarene, 1925 N. Fifth St. with an hour of visitation prior to the service at the church. Pastor Dan Vickey will officiate.

Memorials: Hospice of NW Ohio or for her children.

Offer Condolences for the family of Elaine S. Collum