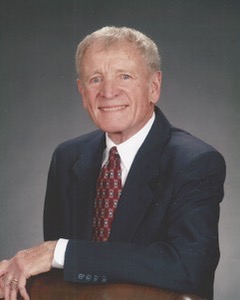 Dr. John Alden “Cal” Wadsworth, died on August 25, 2020 at the Ohio Veterans Home in Sandusky, Ohio where he had been a resident for several years. He was born on March 5, 1935 in Fremont, Ohio to the late Dr. Alden J. Wadsworth and Helen (Gilmore) Wadsworth. Cal graduated from Fremont Ross High School, University of Toledo and The Ohio State University College of Dentistry.

He was an avid “Buckeye” and a dedicated patriot and student of American Christian History. He served as a Lt. Commander in the U. S. Navy Dental Corps and opened his private dental practice in Ojai, CA in 1965, caring for residents of the community until his retirement in 1985. He was a member of the Ojai Rotary Club, the Academy of General Dentistry and the International Academy of Gnathology. While in California, Cal enjoyed sailing and backpacking in the High Sierras with family and friends. He achieved a leadership level in the Amway Business and affected the lives of many Independent Business Owners across the country. He was a member of the Sacramento (CA) Banjo Band and the Kettering (OH) Banjo Band.

Memorial contributions may be made to the Wounded Warrior Project at www.woundedwarriorproject.org or the Salvation Army at www.salvationarmy.org.