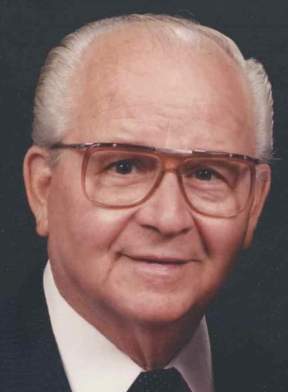 Daniel S. McNutt, 92, went home to be with the Lord Saturday, September 26, after a full and long life. His firm belief in God and his strong devotion to family were the hallmarks of his life.
Daniel was born to the late James and Della McNutt in Bullitt County, Kentucky. He served in the army during World War II for three years and after discharge he used his G.I. benefits to attend Trevecca Nazarene University to prepare for full time ministry in the Church of the Nazarene. At Trevecca he met his sweetheart, Nora Dean Gilliam, whom he married and loved with his whole heart for the rest of his life.

He was a devoted husband, a loving hands-on father and later “a good Pa” to two grandsons whom he adored. He ministered faithfully to 7 different congregations and remained friends to the end with many of his former parishioners. He was active in his community and in his children’s schools. His ministry did not stop at the church walls but reached out to all that he came in contact with.

He is survived by his daughters Danna McNutt and Margaret (Ronald) Billow, two grandsons Matthew (Heather) and Vaughn Billow, and great grandson Jackson Dean Billow. He was preceded in death by his parents, five brothers, one sister and his loving wife of 52 years.

A memorial service will be held at the Fremont Nazarene Church Oct. 12th at 11 am with interment at Springhill Cemetery, Nashville, Tennessee at a later date.

In lieu of flowers, memorials may be made to the Nora Dean McNutt Memorial Scholarship at Trevecca Nazarene University (333 Murfreesboro Pike, Nashville, Tennessee 37210).

Offer Condolences for the family of Daniel S. McNutt