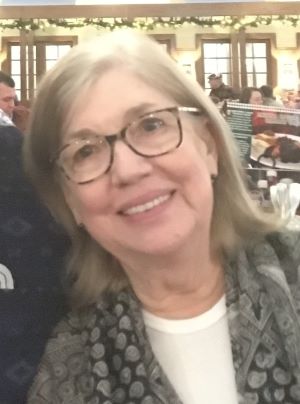 Carol Steeves, 75, of Beavercreek, OH passed away at her home on January 9, 2023.  She was born in Evansville, IN to Willis and Bettye (Clewlow) Murphy.  Carol was a 1966 graduate of Fremont Ross High School.  She married Jon H. Steeves on November 20, 1965 in Fremont OH and he survives.   Carol enjoyed working at Wright Memorial Library in Oakwood, OH for 14 years.  Carol was a long-term volunteer at the Wright-Patterson Air Force Base (WPAFB) Thrift Shop.  She was a member of the WPAFB Officers’ Spouses’ Club, Beta Sigma Phi and a DAR charter member.  Carol loved to travel and traveled throughout Europe with her husband, living abroad for several years.  She also enjoyed needlework, sewing, gardening and cooking.  She won several “Best in Show” awards at the Greene County Fairs in Ohio for her various bouquets, sewing and baking entries.

Carol is preceded in death by her parents.

Private graveside services will be held at Oakwood Cemetery in Fremont, OH.

In lieu of flowers memorials may be made to the Wright Memorial Library at https://www.wrightlibrary.org/foundation.

Offer Condolences for the family of Carol Steeves