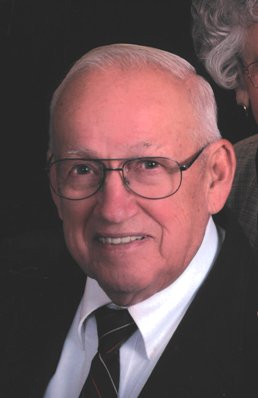 C.W. “Bill” Yeager passed away unexpectedly at his home in Fremont on July 20, 2020. He was 93 years old. He was born on August 30, 1926 in Fremont to Carl and Bertha (Traunero) Yeager. Bill married Mary H. Lukac on June 16, 1951 at Immaculate Conception Catholic Church in Port Clinton, OH by the Reverends Karl Brand and Nicholas Traunero.

Bill graduated from St. Joseph High School in 1944 where he played basketball. His single game scoring record of 43 points still remains. Bill served in the U.S. Navy during World War II. After his discharge he attended Tiffin University.

He was preceded in death by his wife, Mary; his parents; sister, Jean Girz and brothers, Tom “Spud” Yeager and Jack Yeager.

Visitation: Saturday from 8:30 am to 9:30 am at Wonderly Horvath Hanes Funeral Home and Crematory, 425 E. State St, Fremont, OH.

The family requests the use of face masks or coverings during visitation, Mass, and graveside services. Social distancing will be observed throughout all services with wait times taking place outdoors. If you would prefer, you may express your condolences at www.whhfh.com or call the funeral home at 419-332-6409 to request that your name be signed in the guest book.

In lieu of flowers memorials may be made to the Thomas J. “Spud” Yeager Memorial Scholarship Fund, or C.E.D.F., both of Bishop Hoffman Catholic Schools, St. Joseph Catholic Church or to a charity of donor’s choice.

Offer Condolences for the family of C.W. “Bill” Yeager