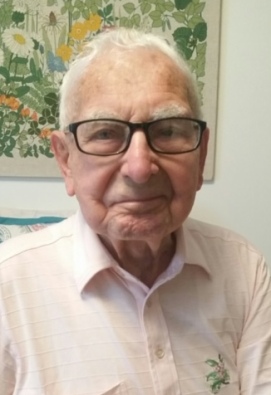 Bernard Malinowski passed away peacefully Sunday morning, May 3,, 2020. He was born on June 9, 1921 in Bochum, Germany to Bernard and Sophie Malinowski and lived most of his youth in France. At the start of WWII, he joined the Allies in the Polish Navy. He left his family in occupied France at 17 and did not see them again until he was 24. He enjoyed his time in the Navy, learning about diesel engines, and visiting the ports all over Europe; but favoring the port of Plymouth England, where he met the love of his life, Hyacinth (Cynthia) Seldon.

Sponsored by his uncle Joseph Zaleski, in 1947 he immigrated to Fremont, OH. Diesel engine technology was starting to emerge for use in the commercial trucking industry and Bernard was there from the beginning. He was hired by Paul Gilmore of Old Fort and sent to Cummins Engine Co. to learn about their truck engines. He became a Master Diesel Mechanic and worked at various trucking terminals in the area until his retirement in 1984.

He was very proud of his family and the life he had made in the US. He loved the home he built on White Road where they lived for over 60 years. He enjoyed reading and investing in the stock market and traveling to visit his family in Europe. After retirement, he became a bit of a chef, taking over some of the cooking duties and perfecting a few signature dishes like Beef Stew and Chicken ala King.

On November 23rd 1946 he and Cynthia married and together they raised three children; Bernie (Elaine), and Christopher, of Fremont, and Cyndy Bresnahan of Boardman who survive. He is also survived by grandchildren Lisa (Paul) Keys, Amy (Ramon) Sanchez, Betsy and Luke Bresnahan, and Mark (Shemina) Lloyd, great grandchildren Kyle, Michael, Marcos, and Ramon Sanchez, and Henry and Roxanna Lloyd, and great-great grandchildren Jackson, Elisa, and Elayna. He is also survived by a sister, Helen Kowalkowski, of France.

Besides his parents, Bernard is preceded in death by his wife of 72 years, Cynthia, his sister Adele Pokorski and husband Henryk, brother-in-law Tadek Kowalkowski, his in-laws, Bernard and Rose Seldon and Violet and Leonard White.

The family would like to thank Mary Lugo and Sandra Ray for the wonderful and loving care given over the past few years as well as their wonderful neighbors the Dray’s. Also, thanks to all the kind and caring people at Valley View, Heartland Hospice and Eden Springs.

Memorials can be made to Bishop Hoffman Catholic Schools.

Offer Condolences for the family of Bernard Malinowski